As usual, I had to look up some information on this.  The white elephant gift exchange is defined on Wikipedia like this:

A white elephant gift exchange is a popular holiday party game found primarily in North America. It has many variations in both the name and the game play. Generally, white elephant parties need a minimum of six participants. With a larger group, game play may be more protracted. White elephant parties have been known to result in intensely vicious and/or playful rivalries between players trying to get sought after gifts. The goal of a white elephant party is usually to entertain rather than to gain. This game is sometimes called a Yankee Swap, Chinese Gift Exchange, Dirty Santa, Thieving Secret Santa, or Parcel Pass.

I think the key phrase here is the goal, it’s to entertain rather than gain.  The term white elephant is defined as:

A white elephant is an idiom for a valuable possession of which its owner cannot dispose and whose cost (particularly cost of upkeep) is out of proportion to its usefulness or worth. 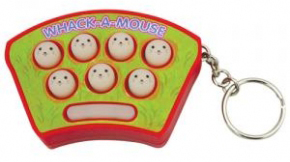 I got a Whack-a-Mouse mini keychain game and some latte lollipops.  Completely useless, probably made in China and something that I don’t know what to do with.  I haven’t tried the lollipops yet, but I heard they’re good.  My kids wanted to open this and I said, “No.”  The price tag says $7.99.  Ouch! 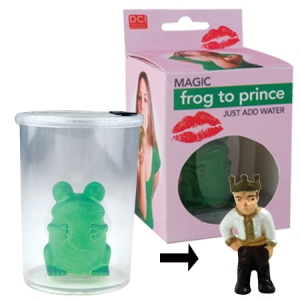 Another gift given was a Magic Frog to Prince… just add water. I’m not sure what the lip prints are for on the box, as it says nothing about kissing the frog.  The frog is probably made from some toxic stuff, so I wouldn’t recommend kissing it anyway.

If this little guy can clean my house, watch my kids, fix my car or mow the lawn, then I would keep him around.  Honestly, he looks more like the I’m-going-to-sit-on-the-couch-and-watch-tv-all-day type.  On to the next gift.

The Baa Humbug Grumpy Party Pooper is actually kind of cute.  Cuter than the prince anyway.  He and Dumas could play together, then he would look a little happier.  I don’t think he likes Christmas any more than I do.

The Get the Perfect Date, Perhaps a Lifetime Mate! book with 500 dating ideas was a funny gift, as this was a singles party.  For kicks, Jay read some of it.  The book is very sexist, as the tips are for the men, but the book, which says you must believe in Sadie Hawkins, is very much written for women.

Old books are always a good gift idea.  There are plenty of old books to be had, probably in your own house.  I’m not sure of the date on this one, but it can’t possibly be current.

The ServiceMaster cleaning kit. Now this is a good white elephant gift, as no money was spent, figuratively speaking.  If you remember about a month ago, my friends house flooded.  Not only did they have to remove all the carpet, but half of the walls as well.  So a carpet cleaning kit was just what she needed!  It came from one of the repair companies.  Dumb, really, really dumb.  For real.  Great WE gift though.

Here’s the gift I gave.  We can call it the wine bottle topiary.  No money was spent on this gift, and I created it in 5 minutes. 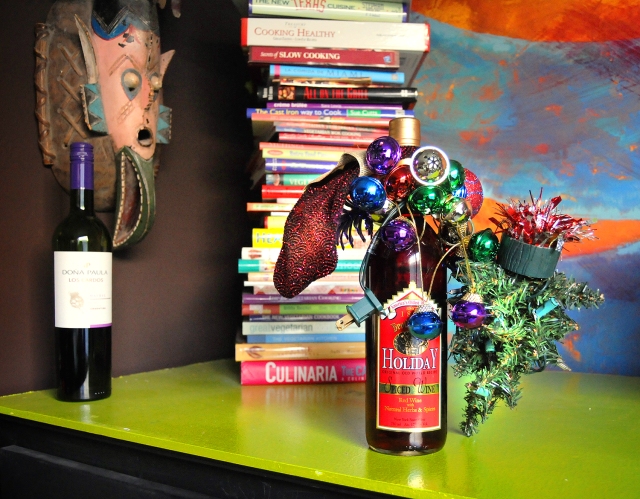 The Holiday wine, which is to be served warm was a gift from an ex-boyfriend over a year ago.  Added to that is a non-working mini Christmas tree that came out of my friends trash, a string of Christmas bells that I’m tired of untangling every year, an old ornament, a small stocking and a piece of tinsel I used in a video.

When giving a white elephant gift, here’s a few ideas and things to think about:

My problem is that I like to follow these guidelines on all my gift giving!  LOL!  It seems funny, but…