December 11, 2009… I was listening to talk radio on my way to work yesterday.  It was so incredibly cold I didn’t want to let go of my warm coffee mug to steer the car, much less turn on the radio.  The news guy was reporting on the experiences of the fake mall Santas this year, disclosing the newest Christmas lists they’re receiving.  Many of the kids sitting on Santa’s lap are not asking for the typical toys and electronics, they’re asking for basic necessities.  “Mommy really needs a job” or “Could we just have our house back?”  Some others are asking for food and clothing.  You know the economy is bad when kids are happy to get socks and underwear for Christmas.

Santa Claus.  The historical Saint and the modern day icon of commercialized Christmas.  Who is Santa?  Santa has many roots in history spanning the globe, roots also ranging from Christianity to paganism.  The early Christian Santa was Saint Nicholas.  He was a Saint that gave generous gifts to the poor, especially to daughters of poor parents so they did not have to become prostitutes.  I could go on for days here about the history of Santa, but he did have his start as a good guy that helped people.

Honestly, I’ve always struggled with the whole Santa thing.  I did not want my kids believing that some overweight guy in a furry red suit is going to give them anything they want for Christmas.  Their dad said that was wrong and I was awful for even thinking it.  Choose your battles, right?  I chose not to fight this one.

My earliest recollection of Santa is asking my parents if Santa was real.  I was in kindergarten, five or six years old, and already wondering how one guy could go around the planet in one night, bringing lots of stuff to kids.  And don’t get me started on the flying reindeer and sleigh.  I suppose my over-analyzing of everything started at an early age.  My parents told me the truth and quickly proceeded to tell me that my knowledge was a secret.  I wasn’t very good at keeping secrets back then.  Even with my secret knowledge, Santa continued to bring me lots of toys and stuff, and much more than he brought anyone else.

Now don’t get me wrong.  I’m not a Scrooge, and if anyone understands fantasy and imagination, it’s me.  Christmas is a magical time for little ones, filled with excitement and fun, that is, in our American culture.  What does the whole idea of Santa say to our children?  We tell our kids at the dinner table that there are starving kids in other countries and they had better eat everything on their plate, and yet if they behave, Santa will bring them everything they want at the end of the year.  I simply can’t feel good about this.  If Santa has enough resources to give us anything we want, then why doesn’t he help out with poverty?

My kids learned the truth very early this year.  Santa is not real, it’s your parents giving you the Christmas stuff.  Now my boys are very close in age, but polar opposites.  Cole sees everything in black and white, whereas Joe’s world is all delightful shades of gray.  When they learned of this news, my youngest Joe, pretended to not listen and carefully responded, not committing to this concept.  Maybe if he doesn’t accept it, then he’ll still get all the presents.  Cole, on the other hand, was extremely upset.  He said, “So, let me get this straight.  You’ve been lying to me this whole time?”  We had at least a half hour talk about why evil parents lie to their children about Santa.

After this very long and depressing conversation, I decided to take this opportunity to teach my kids about Santa.  Not the look-alike mall Santa, but the conceptual Santa.  It’s time to go from believing in Santa to being Santa.  Helping people in need is being Santa.  When my kids see Santa, the look-alikes or the flat wood cutouts in the neighbors yard, I want them to think of doing a random act of kindness or helping impoverished people. 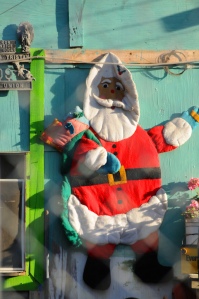 Of all the crazy Santa pics I’ve taken, I like this one a lot because I took this photograph in Nuevo Laredo, Mexico… in May.  Santa must be hot in his winter clothing, but he still looks happy to be there.  If we think of Santa in a new way, then he is not just a Christmas figure, but a visual representation of goodwill, unity and inspiration.  I think the people in Mexico understand this concept already and we can learn a lot from them, as we always do on our trips to Casa Hogar Elim.

Addition, December 15th, 2010… At some point in my life, I must have believed in Santa and liked the whole Christmas thing, as I found this in a box of stuff:

I’m trying to teach my kids that we don’t need a bunch of new stuff to be happy.  If getting something new is an emotional high, then getting lots of new stuff at once is like an overdose, right?  Good things in moderation?  My kids, for the most part, are good with this.  At 10 & 11 years old, I’m not sure how long it will last.

I was talking to a co-worker a few days ago, and she feels the same way I do.  Let me just say, it’s not often I run into people with the same radical views I have on things. 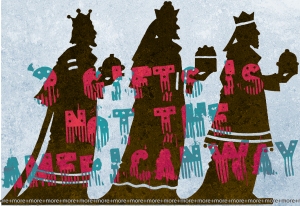 She said a couple of really great things.  First, is that the wise men gave baby Jesus 3 gifts.  That’s plenty, so that’s what her kids get.  And not three extravagant ones either.  This is not the American way though, is it?  Unfortunately our kids our good with this until they see that Johnny Jones up the street got an iPod touch, a new Xbox 360 with a Kinect, several games, a cell phone with unlimited texting and minutes, new name brand clothes and other gadgets, all in one day… Christmas.  Now the comparison starts.  Those things aren’t bad, but all at one time?  I agree with the 3 gift plan.  I like it.

Second is Santa.  She said that her kids know that Santa talks to mommy before getting any gifts, as this protects her from puppies, reptiles and expensive, over-the-top presents.

My kids know that Christmas gifts will not be over they top.  They seem genuinely okay with the way we’re doing things.  They still want stuff, but like me, they do think about things before they purchase anything, or even ask for anything.  I like that.  🙂