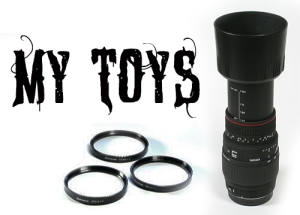 With my halfway point coming soon, and in efforts to do something fun and creative, I wanted to test out a couple of ideas I had.  As I was playing around, my dining room table completely covered with junk, a friend called me to see if I had a specific camera lens.  He was on vacation and just wanted to play around with a macro lens.  Turns out, I have a Sigma 70-300 lens with 200-300 macro capabilities.  I also have a set of three close up filters, a x1, x2 and x4.  These have been sitting in my camera bag doing absolutely nothing for about 10 years.

Why haven’t I played with my toys?  These are old, but not outdated at all.  They worked great with my film camera, and now they work great with my digital camera.  As I was pondering this, I realized I’m playing with someone else’s toys.  I was scanning some stuff on my friend’s toy, an HP flat bed scanner.

This really got me thinking about the stuff I own.  I’ve cleared out a lot of stuff over the years, and now I’m trying not to buy nearly as much stuff.  I have a garage full of plastic tubs, full of stuff.  Heck, I don’t even know half of the stuff in the tubs.  Would I miss anything if it all disappeared?  Am I bored with all of this stuff?  If boredom is something we all struggle with, it does beg the bigger question…  Is boredom caused by our culture, human nature or both?

We live in a materialistic society.  With Christmas coming up, I’ve thought about this from a “receiving gifts” standpoint.  As children, holidays are for getting gifts.  Birthdays bring toys from friends and parents, while the mail brings cards stuffed with money from distant friends and relatives.  Christmas has a tree, the space under it filled with wrapped surprises from our family, and if that’s not enough, a fictional guy wearing a red suit will bring even more stuff.  So let’s say, on average, a child receives 15-20 gifts at one time during a holiday.  They will choose their favorite, play with it for a while.  They will probably give everything a test drive (except for the ugly sweater from aunt Martha), then gripe about having to put it all away when the tree comes down or we’re cleaning up after the birthday party.

I would really have to call this overload.  How much of these holiday gifts are really necessities?  I was an only child, and I had a ton of stuff under the tree.

Christmas for me as a child was always materialistic overload.  I received more stuff in one day that I could play with in a month or more.  I learned to expect lots of stuff, and anytime something came in the mail, it would surely contain money.  This didn’t pan out so well in the future.

As a teen, I acquired four siblings in less than a year.  That wasn’t a problem, however we didn’t have a lot of money.  The guy in the red suit must have started a budgeting program, and eventually quit giving me stuff.  I lived in a wealthy area, and was judged by the things I did not have.

As a young adult, I still needed my ‘stuff fix’, so I got my first credit card.  This was great because I could get all of the stuff at once and pay for it later.  And oh, do we pay for it later when it’s on credit.  I do believe materialism is as much, if not more, of an addiction that crack or booze for some people.

Over the years, I learned the hard way, that I really can live within my means, actually I could live with less than my means.  Trying to teach this to my kids, when society is teaching all of the opposite things, is no easy task.  No, you will not get a cell phone, you’re 10 years old.

It’s human nature to adapt to our surroundings, our culture and what’s familiar to us.  We adapt to what we see everyday, we take for granted things that we have but don’t have to think about.  Take a kitchen sink for example.  Do you ever appreciate your kitchen sink?  When mine was on order (see, I even special ordered a sink, showing how spoiled I am), it was late coming in.  I had to go almost 3 weeks with no kitchen sink.  I had to wash dishes in the bathroom and not use my kitchen much.

How about that small shower I wanted to remodel?  Not so much anymore after a mission trip to Mexico where hot water is sporadic, if the water is working at all.  When I come home each time from Mexico, I really appreciate my small, builder’s grade shower with the dingy grout and crusty caulk, but after being home a while, I desire to put in new tile and a new faucet, my shower appreciation becoming a distant memory.

Are we, as humans, wired to adapt to our culture, not matter what it is?  Are we also wire to always strive for more?  We are motivated by inspiration or desperation.  People in need are motivated by desperation, trying to just have their basic needs met.  When we aren’t in need, what inspires us?  I have a lot of stuff, so inspiration to use my macro lens never even crossed my mind.  Out of sight, out of mind.  If we are all inundated with stuff, we can’t possibly have the time to be motivated to use it all.

So to answer the earlier question, what causes boredom, I don’t have the proven scientific answer, but I believe it’s both.  Nature and nurture.  So what do we do with this?  Here’s my ideas and what I plan to do.

I will throw this out as a challenge.  Find a toy you haven’t played with in a long time.  Either take it out and play with it or trade with a friend.  Here’s a few other things to think about.

I’m sure there’s many more of these, but that list I just made is considered info overload.  Kinda defeats the purpose, right?  Pick 2 that you like and ignore the rest.  Happy holidays!

4 Responses to the person with the most toys, wins [day 179]