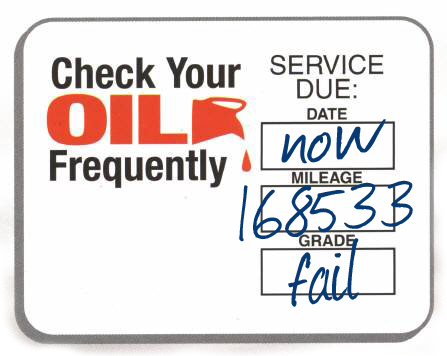 Duh.  My car is 14 years old, of course it has some leaks.  I was refused an oil change yesterday because my car has a few leaks.  This is a first.  I’ve never had this happen before, so I asked about it.

First, he said my car had several leaks, the oil pan, the gasket, the drain, pretty much anything that could leak, is leaking.  At this point, I’m wondering if I should even be driving the car.  He said it’s normal leakage and he doesn’t recommend that I get it fixed, as that would be a waste of money.  The only way I should think about fixing that is if it’s spewing out oil, not just slow leaks.  Umm, seriously?  So if I can’t get an oil change, I should just wait until the oil is gone and the whole engine blows up?

The guy continued on to say that they don’t want to be responsible and I could come back saying it leaks and they caused it.  So this can’t happen with a new car, I guess.  I understand their position, however I’m extremely disappointed.  Yes, my car is very old, but it’s also very paid for and is very good.  This feels like vehicle age discrimination.  I probably take better care of my car than most people, proving somewhat that the preventative maintenance works.

I guess I’ll go the the Infiniti dealer service department.  They have always been great with my vehicle, even though it costs a bit more.  I just don’t have the equipment or desire to do this task myself.